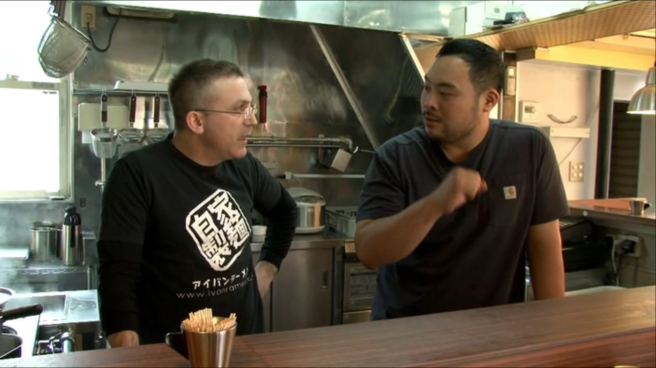 Can a non-Asian out-Asian an Asian?
There are a number of issues intertwined in that mouthful of a question. One issue that interests me especially is whether racial or ethnic identity can be assumed by anyone. After watching the “New York” episode of A Mind of a Chef (2012), again (!), I was, this time around, struck by the phenomenon of Ivan Ramen. (Above, David Chang of Momofuku fame discusses ramen with the famous Ivan of Ivan Ramen of Japan and now in Manhattan).
In the food world it seems fairly acceptable for white chefs to cook so-called non white food (aka ethnic food) and vice versa. And, being able to cook a food “outside” one’s own ethnic or racial background seems to be a kind of desired challenge and personal and professional achievement among ambitious chefs. I have no qualms with this; in fact, it reminds me that ethnic and racial culture is malleable and that there are significant limitations to the way most people approach the concept of cultural authenticity.
But if the world of food helps us to see how ethnic culture does not (or need not) solely “belong” to a certain group of persons, can this also be possible for ethnic identity? Is ethnic identity just as malleable as ethnic culture? A white person may be adept at Japanese cooking, but can a white person choose to identify as Japanese? I guess it would depend on what we mean by ethnic identity. If it is defined primarily in cultural terms, then shouldn’t a non white person who embodies a number of Japanese cultural practices be entitled to identify as Japanese if she wishes? Unless being Japanese (or some other ethnic and racial identity) is more then a set of cultural practices. But what would constitute “more then?” 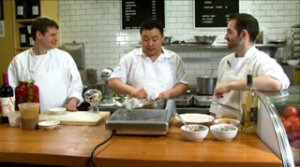 I recently watched the “New York” episode of A Mind of a Chef with David Chang, from season 1 (2012). In the middle of the episode, Chang visits the Torrisi brothers of the cultishly-famous Torrisi Italian Specialties, and Parm and Carbone (and I guess they have a French restaurant that opened recently). The Torrisi brothers cook a pasta dish in homage to their youth and then Chang cooks a Chinese noodle dish in the same spirit. Interestingly as Chang adds a chili pepper sauce and a pile of anchovies into his dish, one of the Torrisi brothers remarks with astonishment that Chang has just employed one of the most Italian of ingredients (presumably the anchovies). That made me wonder: there are a lot of ingredients that both Italian and Chinese cuisines share but are utilized in ways that make Italian food different from Chinese food. That’s obvious enough, I think. But less obvious and perhaps more challenging is whether that means there is such a thing as Italian food or Chinese food. Yes, both cuisines are hyper regional, but the diversity of regions in each cuisine can be described as particularized expressions (or, perhaps more philosophically, meditations) of Italian or Chinese cuisine because they speak to a general Chinese-ness or Italian-ness. I see such a sentiment all the time in the world of food television when chefs talk about flavor profiles. In fact, in this episode of A Mind of a Chef, the observation that both cuisines share integral ingredients moves to a recognition of different flavor profiles despite shared ingredients. But what exactly constitutes an Italian flavor profile, and is that simply a matter of culinary convention or does it point to a larger fact that there is something intrinsically Italian or Chinese? I am inclined toward convention, but wouldn’t that suggest that differences are meaningless? Yet differences do matter, at least at an intuitive and experiential level. Even as a practical matter, being able to make distinctions is important too. In the restaurant world, maybe that’s what matters most in the end—how else would a chef describe his or her food without distinctive flavor profiles and/or ethno-cultural markers? But outside the restaurant world, does that explain it all? Differences (and making distinctions, especially at the level of identity) matter, but in what sense do they matter? In what sense should they matter?