“About six-in-ten adults who have a mixed racial background say they do not see themselves as ‘mixed race or multiracial.’ When asked why they don’t identify as multiracial, some say they were raised only as a single race, and others say they physically look like a certain race.” —Multiracial in America, Pew Research Center 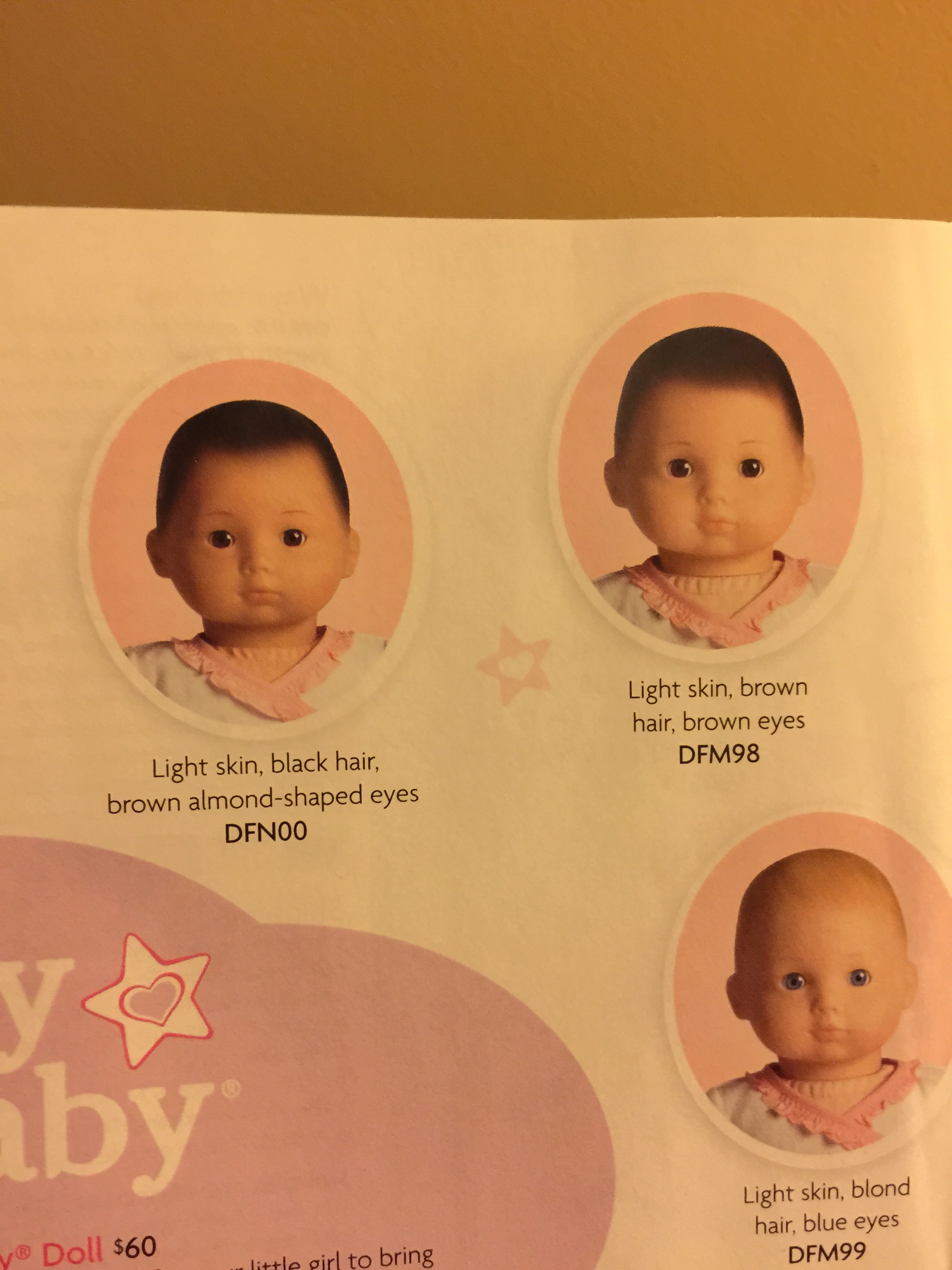 Racially or ethnically specific baby dolls from the company that makes the American Girl line of toys–apparently very popular, at least based on the lines that form in front of the midtown storefront (in Manhattan) during special events. (My 3 year old daughter seems to like these dolls a lot too.) I get why the American Girl company made these baby dolls, and I get why some kids and their parents prefer them over the “traditional” American girl doll (traditional meaning white). In other words, it makes sense for a little kid to have a doll that looks like her. But there’s the rub. Do these dolls look like an Asian American kid or a Latina child? The doll on the top left is suppose to appeal to Asian American girls–note the “almond eyes” description. My daughter has that one. When I first saw the actual doll, my initial reaction was, okay, maybe it looks Asian. But then when I saw the picture of the doll next to the Latina doll (see the picture top right), I began to wonder what the American Girl company is trying to do with these dolls.
Both dolls on top look pretty much the same. Am I completely off the mark on that? Perhaps more interestingly, the top two dolls don’t look all that dissimilar to the one on the bottom right, which is suppose to the Caucasian doll.

I was more amused than anything else when my daughter received her American Girl baby doll. The doll, especially in relation to the picture of the other ones, is a tad funny looking. Amusing or not, the dolls do reflect, I think, the kind of racial dynamics at play in American society. On the one hand, the increasing sensitivity to difference and the affirmation of diverse identities. On the other hand, respecting difference within the context of whiteness. The latter dynamic is the more subtle and covert dimension of the American experience of race and can be studied in the comparison of the American girl dolls.

My feeling has always been that American society is quite willing to embrace racial and ethnic differences but under certain, often unspoken, stipulations. This observation is not entirely original; we all probably can observe what I mean by flipping through a magazine or watching some commercials. Black is beautiful, but not too black please (Halle Berry, anyone?); nothing wrong with being Asian so long as one doesn’t look too Asian (read: foreign). Perhaps that explains, in part, the popularity of skin whitening and eyelid surgeries among some Asian and Asian American communities. Looking and being different is fine, even to be celebrated, to the extent that difference is modeled after and conforms to “white” standards of aesthetics and “mainstream” or “traditional” American values.

I have nothing against American Girl dolls; my daughter loves playing with hers, and a lot of other girls seem to adore them too. Nothing wrong with childhood joy. But these American Girl baby dolls are indicative of powerful racial forces in American society. An Asian American girl playing with an Asian American-esque baby doll–why not? Empowering, isn’t it? That she can play with a doll that looks more like her provides subtle affirmation of who she is. But what kind of message is covertly communicated when the doll that supposedly looks like her looks more like the white doll, the main difference perhaps being the color of the dolls’ hair? How about this as a possible message: It’s great to be Asian American, but not too Asian American. To be one of us (i.e., American) is to be more like that other doll, white and whatever social and cultural meanings that may be presumed and affirmed with that whiteness. Is this all too sinister? Or, is a baby doll just a baby doll? 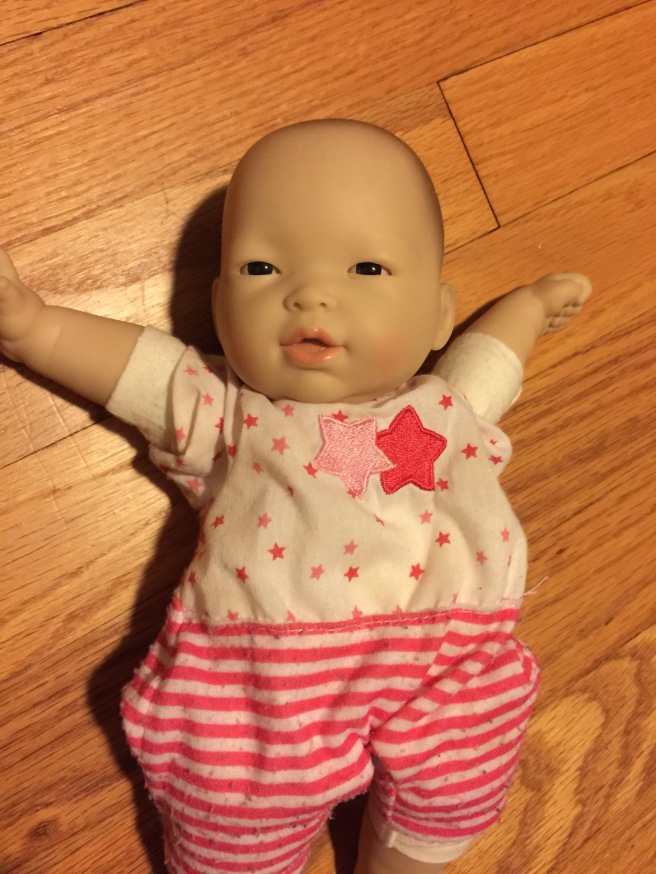 This is one of the many dolls that inhabit my abode. This one is suppose to be Asian-looking. Can you tell?

The whole attempt at trying to create ethnically or racially sensitive dolls is interesting. It’s entirely understandable, giving kids the opportunity to identify with the dolls they play with, at least at the level of physical appearance. In the case of this Asian doll, however, I can’t help but think that there is something awry about the whole phenomenon.

How is this doll Asian or, maybe, Asian American? Can we depict Asian American-ness? Is being Asian American a function of how one looks? If that’s the case, then what does Asian American look like? Playing that game seems rather perilous, ripe for reinforcing stereotypes, creating insider and outsider boundaries based on something as plastic as appearance. We shouldn’t assume that’s all there is to being Asian American, or any other ethnic, racial identity.